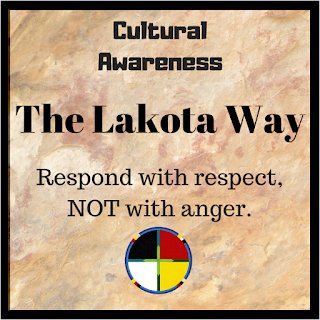 The great thing about the United States, well, at least what I think is great about the United States, is that there are many, many cultures within its borders. We know it is horribly wrong to try to kill off a culture and get those people to assimilate into another culture. Instead, our cultural differences should be celebrated and shared! We should learn from other cultures, rather than shy away from them and treat them as inferior. Learning from other cultures can do nothing but help build empathy. Example:  We can learn from the Lakota culture that it is good to be thoughtful before responding. When a question is ask, or an issue arises, or there is some sort of problem, the Lakota way is to think about what has happened silently, reflect and process the situation before responding.  At times, in Euro-American culture (white America), we tend to respond instantly in a situation, without thinking it through. Something happens and we instantly fire back or respond or spout off, without care or concern for the other person's feelings. When there is a problem or disagreement, this can be especially harmful because when responding with emotion/anger, things can be said that are hurtful. The situation can become worse and feelings can be damaged.  I am as guilty as anyone, as just recently, there was a problem and I responded instantly in a very emotional way, which did nothing but make the situation worse and people feel bad.  I would encourage everyone to adopt the Lakota way. Before lashing out or ripping someone or immediately responding with emotion, think the situation/issue through. Process what is happening and look at the situation through their eyes, rather than just your own.

Adopt the Lakota way for handling problems. Be respectful and thoughtful. This, I challenge to you.
Posted by Mr. Klumper at 9:56 AM No comments: