Pencils are made all wrong! 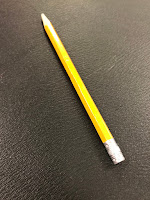 I have a big problem with the way pencils are made. They are made all wrong. Think about it--when using a pencil, what runs out first-the lead or the eraser? DUH! It's obvious. The eraser always runs out first. Why? Because it's EXTREMELY small compared to the pencil lead. I was sitting in a classroom the other day looking at a cup full of pencils. There were about 30 of them. EVERY pencil had no eraser. It had been used up, worn down to just the metal. See, here's the thing--pencils are all wrong because the way they are made, with such a small eraser that gets used up so quickly, discourages risk-taking. When you take risks, you might make a mistake, which is OK! With such a small eraser, the students are not able to fix their mistakes. They are discouraged from trying because if they mess up and need to try again, they have no eraser left to do so. Think about it--if you look at a pencil and that really small nub of an eraser, it just screams at you: "Don't mess up too much because you have a very limited eraser here!"  Rather, the eraser should be much bigger and longer because then, the students get this message, "Go ahead! Try! Take a risk! And if you make a mistake, that's okay because you can erase it!" Too often, students hold themselves back from trying something new or difficult because they "don't want to get it wrong" or they "don't want to mess up." But that mindset needs to change. Taking risks and trying new things is how real learning happens. Deep learning comes from students trying something, potentially making a mistake and learning from it. It's the power of the reflective process!
So if you know someone who works at a pencil factory, tell them to increase the size of the eraser!
Posted by Mr. Klumper at 8:57 AM