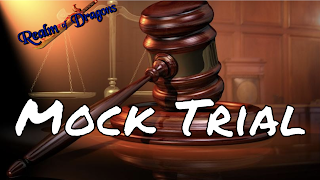 Recently, in my social studies methods course, we held two mock trials. Mock trial #1 put the Confederate statues on trial, to determine, through trial, if the confederate statues should remain or if they should be taken down. In the second mock trial, we put the border wall along the US-Mexico border on trial, to determine whether the wall should be built or not.
The process: Half the class participated in the border wall mock trial, while the other half of the class participated in the Confederate statues mock trial. Due to numbers, we needed two mock trials as there were too many people in the class for one mock trial. In the mock trial that the students were not part of, they served as the jury and fact checkers.
For each mock trial, the students were assigned to either the prosecution or the defense.  Students did not necessarily argue for what they personally believed should be done in regards to the issue. I believe this is important because it forces the students to think about and dive into both sides. Besides, if students were left to choose what side they wanted to argue for, we may not have equal sides and it could get too personal. In addition, some students do not want people to know what they believe in personally. Once assigned to a side, the group of students determined what role each would fulfill. There were two roles: attorney and witness. There were two attorneys and three witnesses per side. They were in charge of coming up with who their witnesses were. They submitted their 'witness list' to the court so the other side could see who would be called and prepare for cross-examination. Once the trial began, I acted as judge and facilitated the proceedings. Each side gave opening statements. Then, the prosecution called their three witnesses, with cross-examination each time. The defense then presented their case by calling their witness, with prosecution getting their chance at cross-examination. Finally, each side gave their closing remarks. The jury then deliberated until they had a verdict, consulting with the fact checkers on any errors that were presented in either side. The jury was supposed to make their decision NOT on what they personally believed, but who presented the best case for what they were arguing.
The mock trial is a very engaging way to generate discussion on a deeper level. It's a great way to discuss current events. It's a project so there will be a significant amount of time spent with allowing the sides to be prepared, in order to have a rich, deep discussion/view of the issue at hand. It's a discussion technique that can be used in many different content areas. It allows the students to think critically, listen, speak and prepare.
Perhaps there is a place for the mock trial in your classroom!
Posted by Mr. Klumper at 3:40 PM