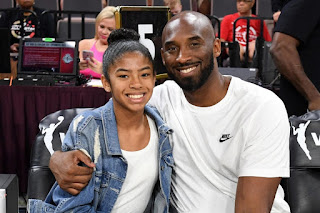 Legendary people like Kobe seem immortal. It seems like they are above normal things like dying in accidents. They are larger than life and could not be affected by things that affect 'normal' people. It was a complete shock to me when I heard the news that Kobe died on Sunday in a helicopter crash. I am still having a difficult time processing this.  I was never a huge Kobe fan. I appreciated his work ethic, his competitive spirit but never considered him my 'favorite player.' Yet for some reason, I just can't stop thinking about the fact that Kobe Bryant is dead.  Perhaps this is why... Gigi, Kobe's daughter that died with him in the crash, was 13 years old. Her basketball number was 2. My daughter Isabel is 14 and her basketball number is 2. Kobe has an older daughter who plays volleyball. Her number is 8. I have an older daughter who plays volleyball and her number is 8. Furthermore, Kobe and his daughter Gigi were on their way to a weekend basketball tournament. Something Isabel and I have done countless times. I think this is why it hits home so much is because they were doing something that so many of us 'mere mortals' have done as well....traveling to a weekend basketball tournament.  I can't stop thinking about Kobe and his daughter in the moments before the helicopter crashed and what was going through their minds. I picture Kobe hugging Gigi tight, as the helicopter spun out of control, knowing the inevitable was about to happen.  It gets me every time when I think about it - Kobe embracing his daughter, unable to protect her and keep her safe in their last moments.
When a tragedy like this happens, it is always the same: a whole bunch of cliches are thrown out there, an outpouring of support/love. People sharing their memories. The things is...all those cliches are true. Yet, we forget about them because we get wrapped up in life and the hustle and bustle of always being busy. We focus so much on things that don't matter, so it takes a tremendously sad tragedy like this to remind us to slow down, take a moment, look up from the screen and appreciate what you have.  How grand would it have been for Kobe to have been able to hear how important he was and how loved he was when he was still alive? Don't wait for a person to die to share how much they mean to you.
Life is fragile. Life goes by so quick. Life can end in an instant. Yes, all cliches, yet all most definitely true.
Posted by Mr. Klumper at 9:01 AM